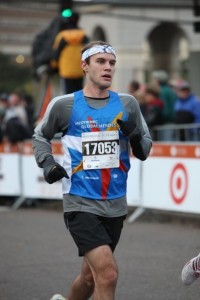 Adam completing the Medtronic 10 miler as a global hero alumni!

Adam was diagnosed at age two, and therefore has no memory of gorging on cookies and ice cream without a care. It was always instilled in him to take charge of his condition, and that led him to study the biology of autoimmune diseases.

Adam has used an insulin pump since 2002 and that worked well for him as he managed diabetes as a collegiate cross country and track runner. Since leaving his undergraduate racing, he pursued his Masters degree and PhD in the immunology of diabetes while maintaining blistering fast times in distances ranging from the track mile to marathons. Adam’s studies relate to T cells and their actions in attacking the beta cells of the pancreas. He hopes his research contributes to a functional treatment of diabetes, either preventing the development of type 1, or leading to better acceptance of beta cell transplantation. In the coming year, Adam has set strong personal goals for the mile time on the track and wants to further pursue success in the duathlon, a combination of running and cycling.